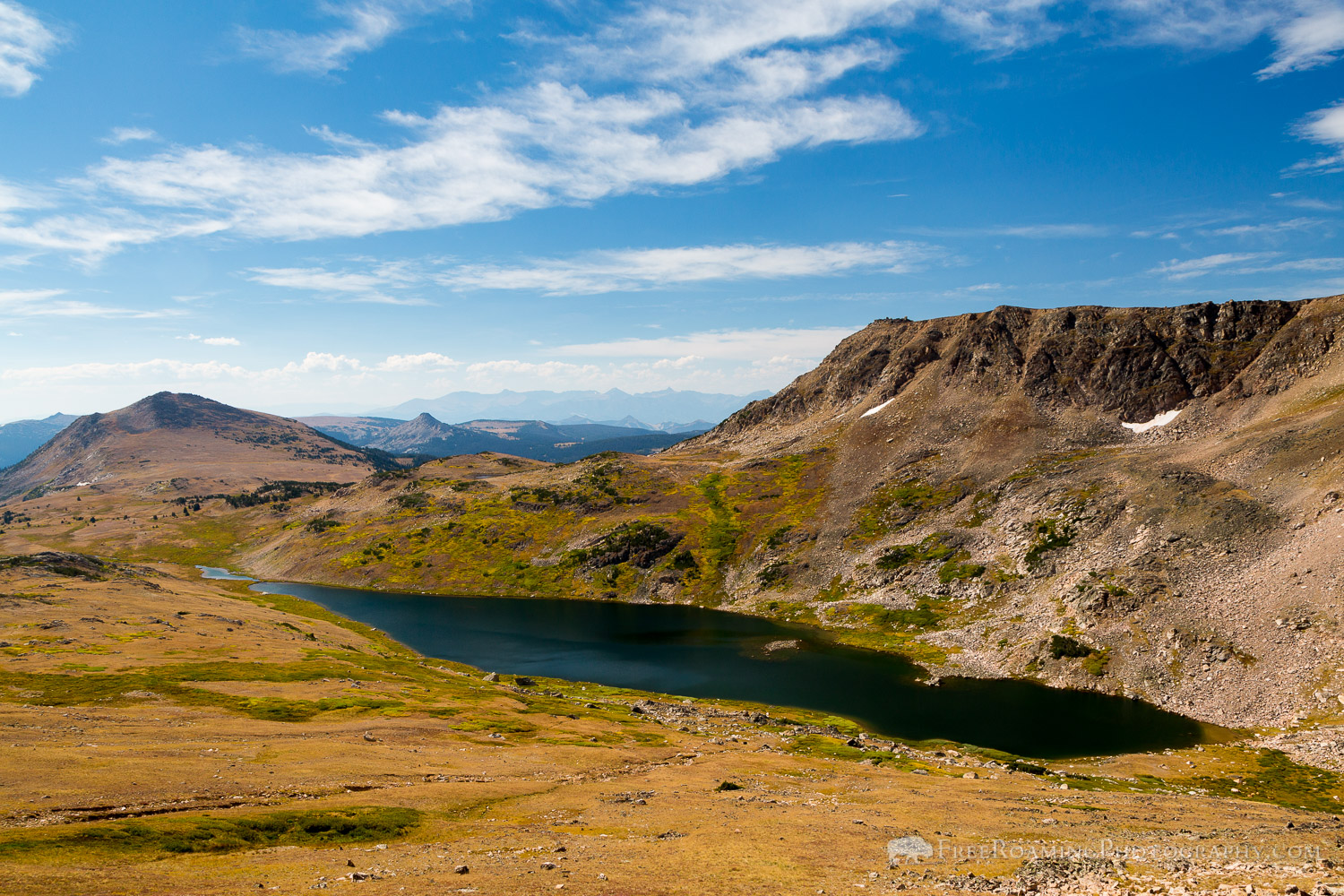 Most people will stop at the Gardner Lake Trailhead for the Beartooth Loop Trail, stand at the overlook, and then continue driving the scenic Beartooth Highway. Hardly anyone ever takes the trail the down Gardner Lake. Even fewer will actually hike the entire loop. It’s a shame too. Few people realize they’re standing on a trailhead for a National Recreation Trail, a designation often reserved trails with a little extra beauty than most. Also sharing this designation are the Pacific Crest Trail, the Arizona Trail, the Appalachian Trail, and many more smaller trails.

At the parking area, look for the sign indicating the trailhead on the east end of the lot. A faint trail will guide you down from there, becoming clearer as you begin to descend more. The trail quickly drops in a steep descent through alpine tundra. All the while, Gardner Lake below begins expanding as the views of the serene lake begin to widen. Near the bottom of the descent, you may notice the road noise begins to fade away as silence takes over.

It’s down here that you quickly connect with the south end of the lake. After paralleling the runoff for a short distance, you’re soon led across the stream. If you’d prefer not to wade through, look for a rockier crossing just a short distance back upstream. Continue onward across a small plateau where the trail levels out for some easy hiking. At 1.5 miles in, you’ll reach a junction in the trail where a small valley drops down hundreds of feet on your left. It’s beautifully capped by large towering granite outcroppings on its north end, slightly reminiscent of some scenery in Yosemite. At the north end of Tibbs Butte here, you have the option to do the loop clockwise or counterclockwise. Though the signs seem to be set up for counterclockwise, I personally enjoyed doing the loop clockwise. I felt as though saving the lakes for last and crossing over Tibbs Butte Pass near the end built up a better climax. Therefore, the post describes the route going clockwise. 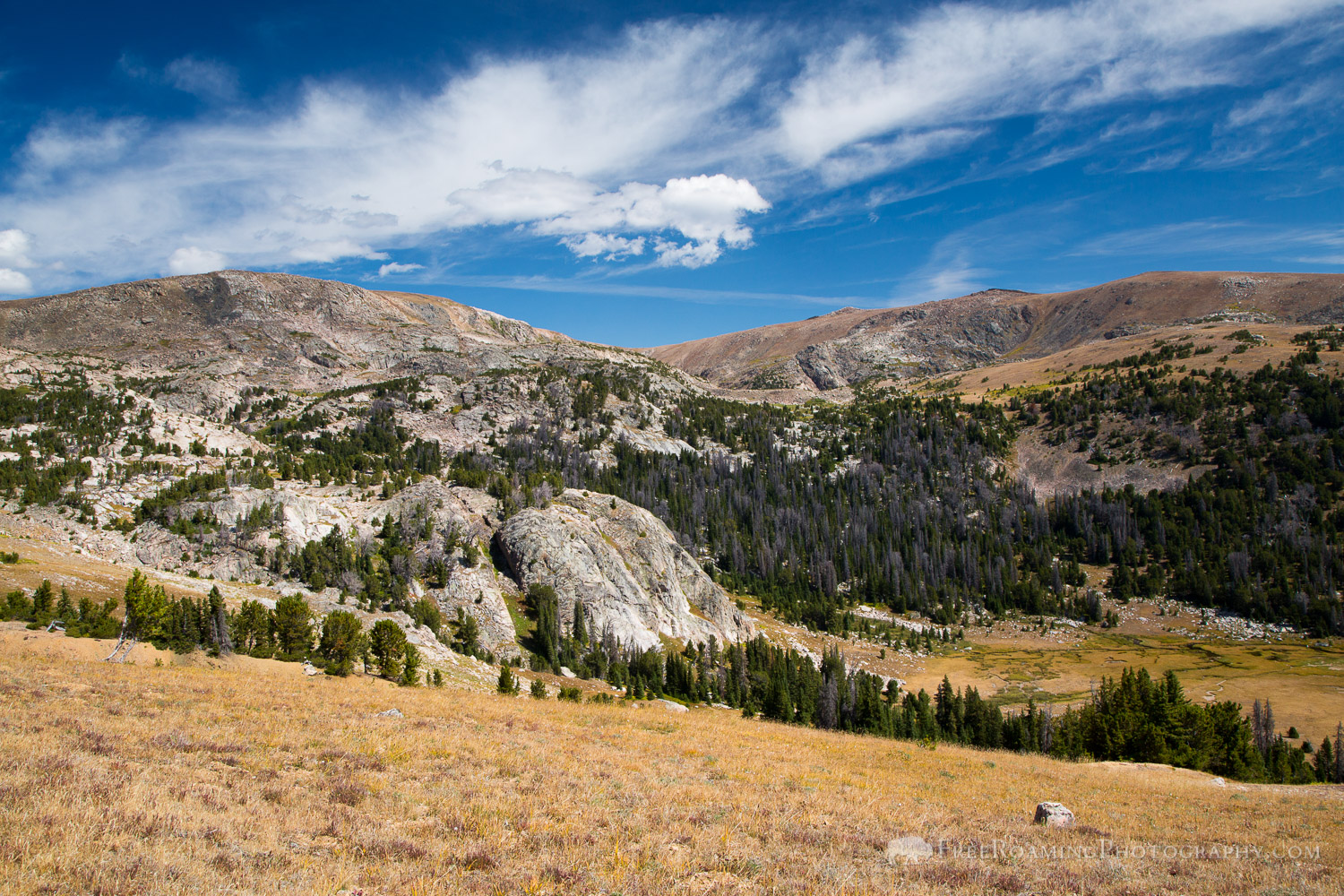 Heading straight from the junction, the trail quickly begins dropping as it approaches a forest. Along the eastern base of Tibbs Butte, you begin to wander in and out of small forest groves as the trees gradually grow thicker on your way down. The trail can be faint at times, but the occasional cairn will help guide the way.

Your views are soon obstructed by the increasing trees, along with Tibbs Butte to the west. Only a sporadic glimpse of a distant valley to the south can be spotted through breaks in the trees. You soon reach a meadow though, where views toward the south begin to open up more. You can see a large valley below opening up into all directions. Here the trail begins a relatively steep descent as it meets up with a creek pouring over a small waterfall. Follow the trail to cross the creek where it then drops through a small canyon, the rushing creek never far away.

You’re soon immersed into the large valley you’ve been getting glimpses of far above. One lengthier creek crossing opens up the views and begins to guide you through a vibrant valley. Small willows lining the creek in the middle are sandwiched by larger evergreen forests on either side as the valley extends into the western horizon. You’ll notice the creek slows down substantially as it flattens out. You may also notice a rather euphoric level of silence.

As you wrap around the southeast side of Tibbs Butte, now towering high above, you easily experience a state of utter solitude. You easily feel like you have the entire place to yourself, and chances are you do. That’s another reason it’s important to always carry bear spray with you. In a wilderness like this, anything can happen.

Beyond the calm open meadows, you enter into a smaller forest that slowly begins to grow thicker. You may also notice strong aromas of pine and spruce through here. You connect back up with the creek where the trees grow denser before emerging into a lower part of the valley. Around mile 4, you’ll come across the junction for the Lower Highline Trail after a couple more smaller creek crossings. If you’re searching for higher altitude adventures, this would be your detour. Otherwise, continue straight on the Beartooth Loop. 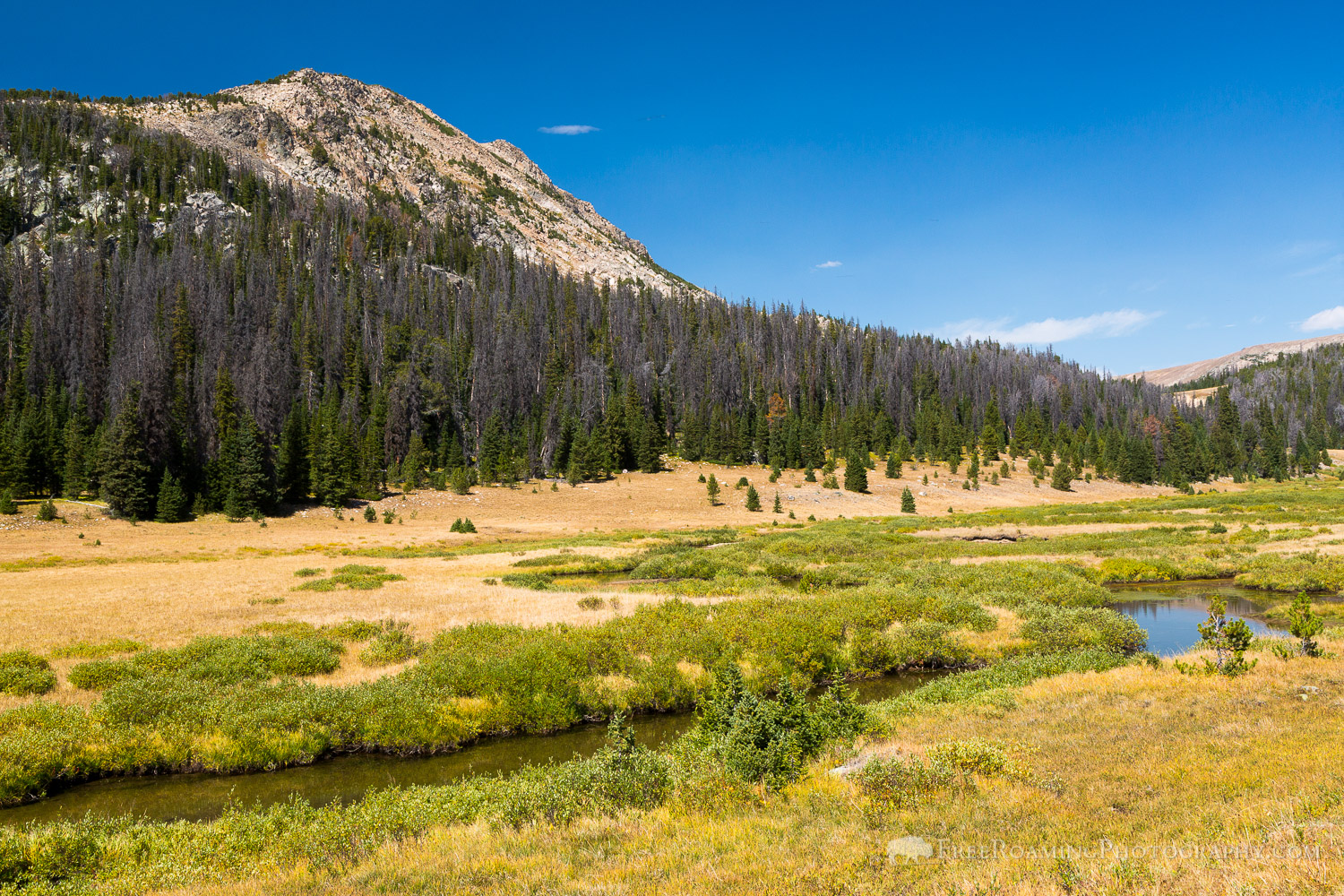 Cross Litterock Creek one more time where you may have to search a bit upstream for a dry crossing. In case you haven’t noticed either, you may also see plenty of fish scurrying around in the water. Many of these originate from Deep Lake, much farther below the valley you’re currently in. You’re led back into a forest, where it soon gets noticeably rockier. Large granite cliffs border the edge of the forest, Tibbs Butte’s rocky base. Continue onward and follow the trail along a rocky descent toward the sound of increasingly louder rushing water. Littlerock Creek is finally on its way to a more southward direction as you’ll soon veer off to the west.

At the bottom of the descent, you’re led out into a large meadow, crowned by the massive Sawtooth Peak. On the other side are large granite outcroppings that grow larger as you wander through the meadow. Shortly after the meadow, you’re brought to another junction, this time for Camp Sawtooth. With the only other option on the sign being the Dollar Lake Trailhead, you continue straight.

The forest shrinks slightly as you begin to climb slightly higher. It’s short-lived however, as you pass through denser trees along a flattening trail. You see a large meadow blanketing a creek just through the trees that persists with you for some time. You reach another junction where you’ll want to head right. The forest remains dense through some gradual and also some steep climbs. As you approach Stockade Lake, the trees begin to gradually shrink slightly.

Stockade Lake opens up to the west of the trail, just through the trees. Small spur trails will lead you to campsites, as well as the lake’s shores. As you begin to round out the Beartooth Loop, it’s worth it to stop for a moment and relax at such a calm lake that you’ll most likely have to yourself. 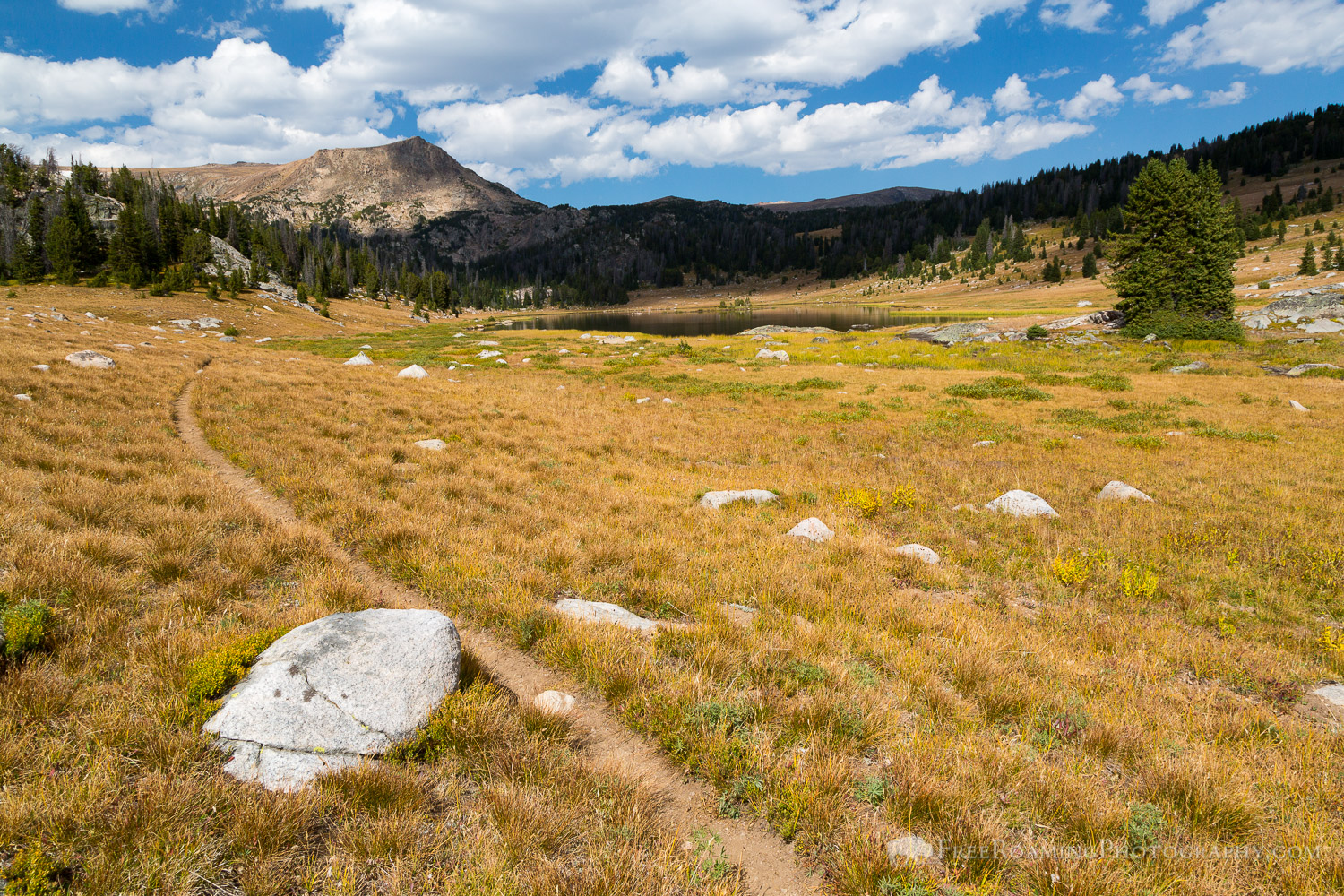 On the north end of Stockade Lake, you’ll head back into a small forest where you’ll cross the runoff from Losekamp Lake up above. Through the trees, the forest begins to thin once again and the trail becomes increasingly rockier. Only a short climb later and Losekamp Lake appears sprawled out in front of you. Follow the trail on its western side up to the north end of the lake. Along the way are many inviting boulders to relax on the shores as well. Enjoy the peace and quiet for as long as you’d like, then continue back up the trail.

Continue north on the trail to find a creek that feeds Losekamp Lake. Here, you’ll notice the trail fades a bit as it approaches the creek. Find an easy place to cross, then pick up the trail again on the opposite side. The Beartooth Loop begins its final ascent through small trees that will grow increasingly smaller as you begin to switchback up toward Tibbs Butte Pass.

One lengthy switchback after another will bring you higher and higher until you’re finally back into a large alpine tundra field. Another final climb brings you up to the small plateau of Tibbs Butte Pass. Here you’ll have panoramic views around the area, marred only by some of the highest of the Beartooth Mountains. Tibbs Butte Pass is yet another spot along the trail that deserves to be appreciated properly instead of rushed through.

From the top of the pass, continue on the trail down toward the original junction high above Littlerock Creek. You’ll drop back down to the fork where you’ll want to take a left to continue back out the way you came in. Make sure you saved some water and snacks though. You’ll notice that the climb out is the hardest along the entire trail and might quickly wear you out.

Like the photography? Check out my Beartooth Mountains Photography Gallery here.

From Cooke City, Montana, head east on the Beartooth Highway for 34 miles. After descending some hairpin switchbacks, you’ll see a large parking area overlooking Gardner Lake (which you won’t see until you’re parked). The trail begins by the large sign.