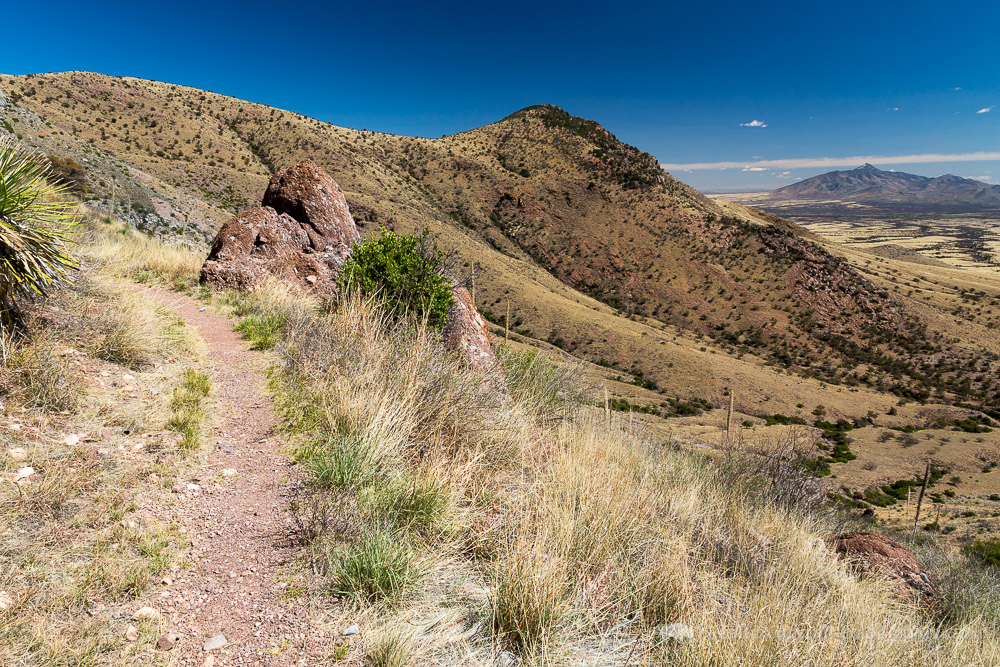 The Yaqui Ridge Trail is an easy two miles down to the border of Mexico from Montezuma Pass, but a strenuous climb back up, ascending 800 feet over some steep sections along the way. At the bottom of the trail is a large obelisk at the Mexican border, commemorating a treaty between the U.S. and Mexico. Another prominent note of the trail is that from the Mexican border, the Yaqui Ridge Trail serves as the first two miles of the 800-mile long Arizona Trail.

The trail itself can be accessed from both Montezuma Pass or the Joe’s Canyon Trail, but since most will begin from the pass, that’s what this log will follow.

From the picnic area, begin heading down the trail that veers off to the left. You’ll immediately begin passing below the eastern side of Coronado Peak, where expansive views of the high desert begin to open up as you’re able to look down the park road toward the visitor center. Once past the peak, the views open up to the southwest where the sky islands of northern Mexico extend deep into the horizon. A remote and foreign wilderness painted in the same color palette and styles as where you stand sprawls out beyond a dark line below, marking the boundary and the line of legal inaccessibility, adding an extra sense of mystery and wonder to the land.

The trail continues to veer more eastward as it quickly meets the terminus of the Joe’s Canyon Trail. Head right to remain on the Yaqui Ridge Trail, and follow as it begins to descend more rapidly down the southern foothills of the Huachuca Mountains. The forests of oak and juniper higher up near the trailhead begin to grow increasingly scarce, dotting the trail with brief respites of shade.

A few switchbacks will accelerate the descent before the trail lengthens out again, stretching southward toward Mexico. Along the way, some very interesting rock and conglomerate formations can be observed just off the trail. The descent continues into increasingly sparse vegetation just before reaching the southern boundary of the United States. A fence will mark the boundary, with a large silver obelisk on the other side. I’m not telling you to cross into Mexico, but you wouldn’t be the first person to take a selfie with it.

Make sure you still have plenty of water with you at this point. Without proper hydration, the next two miles back up to the trailhead will be excruciating. The unique scenery of southern Arizona is worth making sure you’re properly prepared to enjoy it.